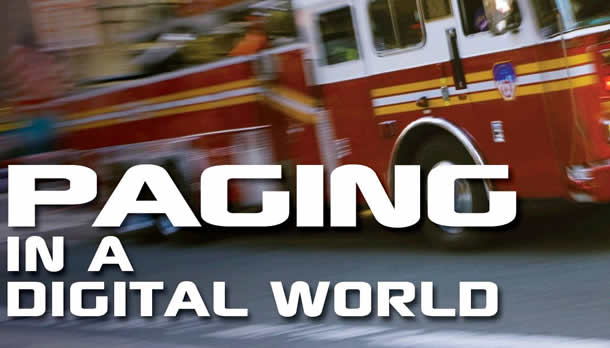 PAGING IN A DIGITAL WORLD

We tend to think of paging as very “last millennium.” Yet while cell phones and text messaging have effectively terminated two-way paging, one-way paging remains a prevalent, critical communications tool in sectors such as EMS, hospitals and fire fighting. With the advent of digital radio technologies such as APCO P25, what options do emergency responders have to continue support for paging users?

Paging, or alerting, is a highly reliable and very low cost method for providing one-way-short communications to low-complexity radio devices. It can flow from a dedicated radio dispatcher, over the telephone system, even from your computer via the Internet.

Paging transmissions consist of the address of the recipient pager (CAP code) and the message. There are multiple analog and binary coding formats used for addressing pagers. One analog address format is known as “Two-Tone” and uses 110 tones ranging from 67 Hz to 2468.5 Hz to provide up to 3,540 unique address codes.

An alternative address format is 5-tone/6-tone. It consists of 12 frequency tones used to represent the digits 0 thru 9, a repeat number tone, and a special tone. The address of the pager is represented by five digits, or tones. This format is capable of multiple addressing; using the sixth tone and capacity is around 100,000 addresses.

There are two important binary addressing formats. Golay Sequential Coding (GSC) allows the pager to have up to four different addresses and provides a system capacity of 400,000 users. More popular is the Post Office Code Standardization Advisory Group (POCSAG) format which uses up to four addresses per pager and with capacity for two million addresses.

Originally, the POCSAG data delivery speed was defined as 512 baud. On-going developments of the protocol and hardware have doubled the speed with POCSAG 1200, and then doubled again with POCSAG 2400.

THE FUTURE OF PAGING

With text messaging and smart phones, do we still need paging? The answer for many agencies remains “yes.”

Many Public Safety agencies are located in rural communities. Many of them, particularly rural fire departments, depend heavily on volunteers. They use paging as a reliable and affordable means of communication with volunteers. Pagers are small, non-intrusive, and usually silent until an alert is received.

For P25 digital communications, conventional wisdom suggests that paging is not supported. This is one reason why some cities or counties that implement a digital radio system have an additional analog network to support paging. However, this may not be the case in the future. The innovative deployment of paging on a P25 Simulcast network in North Dakota illustrates this point.

PAGING IN A DIGITAL WORLD

The city also required the alert to activate station lighting and to open the main garage doors to minimize fire unit response times. A custom alert solution was implemented through the Call-Alert and Talk-group functions within the P25 standard.

Each fire station was assigned a talk group with an additional talk-group designated as “All-Call Fire Alert.” This is used to alert all of the Fire Stations at once.

In an emergency, the dispatch operators can now alert each or any combination of Fire Stations. A message describing the emergency can be heard over the PA system while the station's lights are switched on and the main doors opened. This combination of functions saves precious time during an emergency and ensures the highest possible level of service to the city. The solution allowed the fire department to move onto the fully digital P25 radio system, offering seamless interoperability with other public safety agencies, while continuing to support the voice and paging traffic that its fire fighters rely on.